First things first.... Apologies for my absence! New job, advocacy and helping with Stop Smoking service training has been a bit of a nightmare!

A little while ago I wrote to the MP & MEPs covering my region and others about my concerns over the damage that the TPD Article 20 amendments might do.

Now, fairs fair, it's the first reply I've had. Sadly, it's a pretty obvious cut & paste effort and is deeply worrying as it shows the level of misunderstanding and the lack of knowledge that the decision makers in this have shown. I'm posting this for public record and to help others spot this in communications with other politicians over the TPD.

Enough babble, I'll let you read and make your own decisions. The emails appear in order of sending.

I am writing to you to ask that the matter of the impending
implementation of the TPD Article 20 amendments is raised again with
the EU Parliament and Commission. This is especially with respect to
its conflict with the Public Health England published advice and that
of numerous other UK health organisations. The conflicting views
highlight the inequity and irresponsibility of the Article 20
amendments.

Ironically in the UK the loudest official opposition to electronic
cigarettes or vaping is coming from the BMA (a medical union, not a
medical authority) and the BMJ (a paid publication of the
aforementioned Union). In Europe the opposition is coming from
pharmaceutical company sponsored or operated charities and groups, as
well as from the tobacco lobby.

I would also appreciate it if the matter of the first licence for a
medicinal electronic cigarette being issued ironically to British
American Tobacco could also be raised. As the MHRA have been appointed
to oversee administration of product licencing for both medicinal and
consumer electronic cigarettes is this not rather cynical? Especially
given this weeks news on the BBC regarding BAT and bribery of the WHO
Tobacco Controllers in Africa.

A number of tobacco companies have already been implicated by the EU
Ombudsman in illegal secret EU meetings and documentation around the
direct involvement of the pharmaceutical industry in the planning of
the Article 20 amendments is publicly available.

I would also like to draw your attention to an upcoming film concerning
the corruption and duplicity surrounding the worldwide actions against
what is potentially the largest public health intervention thus far,
the trailer for which is here https://youtu.be/zSq9iqal2cA

I would appreciate an opportunity to speak with you in person on these
matters, if you would be so kind as to let me know when that might be
possible.

Molly has asked me to thank you for taking the time to e-mail her and to respond to you on her behalf.
She is grateful for the information and trailer you provided and realises the situation of people who have found e-cigarettes beneficial as an effective transition away from traditional cigarettes.

Legislation on e-cigarettes was voted upon last February 2014 before Molly was an MEP, but as you can read in this press release, the position of the Greens-EFA group in the European Parliament focused on how to 'ensure that e-cigarettes can be used safely to help smokers stop smoking, and not act as a gateway product for non-smokers.'
The new rules for e-cigarettes aim at harmonising the quality and safety requirements of the products for the benefit of consumers. Molly believes that small and medium-sized enterprises can potentially benefit from clear and harmonised rules for e-cigarettes that apply throughout the EU. The Directive foresees a transitional period to give companies time to adapt to the new legislation and if necessary, to sell off existing stocks insofar as it complies with relevant legislation.

Finally, she believes that all labelling of e-cigarettes should accurately reflect the amount of nicotine contained, to ensure consumers are aware of what they are buying, and these rules on packaging and labelling will ensure that other consumers like you are better informed.  That said, any future policy on the taxing and labelling of e-cigarettes should have sound scientific studies backing it up, and that health benefits that have been mentioned should certainly be carefully considered. Molly is acutely aware of the influence of corporate lobbyists on public policy, and she and her colleagues in the Greens-EFA group consistently push for greater transparency from lawmakers in who they are meeting before policy is developed and voted on. As such, the group are pioneering their new tool, the Lobby Calendar, in which Molly and her fellow Green MEPs publish which lobby groups they have met. You can find out more about Molly and lobbying here.

Molly genuinely appreciates the views of people who have found e-cigarettes very useful in shifting away from cigarettes, and of those small businesses like the ones at home in the South West who will be covered by the new legislation. She will certainly bear these views in mind if there are any future discussions or votes on this issue at EU level. She is also mindful that current research shows it is not yet clear to what extent e-cigarettes attract young people to smoking.

The revision of the tobacco products directive last year is better explained in this useful mythbuster document from the European Commission here.

Thanks again for raising this issue with Molly. She loves the West Country and is keen to ensure that people in the South West are well represented in the EU. Molly represents over 5 million people in the region as such she is unable to provide conventional surgeries where you can meet one to one similar to those of MPs. However, you are more than welcome to attend any of her events and catch her afterwards. If you'd like to keep up to date with her work in the region and here in the European Parliament, you can do so via her website http://mollymep.org.uk/, or through her monthly e-newsletter.


Tom,
thank you for the reply, although I'm very disappointed that Molly wasn't able to reply herself. Sadly the reply shows a lack of knowledge on the subject, a lack of appreciation of science and smacks of being a copy/paste from existing EU and party responses.

I find that insulting not just to myself but the near 4 million vapers in the UK alone, not to mention the millions more across the EU. It is not good enough and I expect better of an elected representative.

I hope that this email stirs the Green Party into action, and I have included other MEPs and my local MP in the hope that they might understand that we're not content to allow this to go forward.

Earlier in the year Public Health England released their report on vaping (electronic cigarette is such a passe term). It was a culmination of 185 studies and the collective work of hundreds of scientists & health professionals. That is on the back of evidence gathered in over 10 years of vaping products being available.

In that report we are told that;

Vaping is at least 95% safer than smoking

There is no observed gateway effect in Adults or Children

That long term use is not an issue


Nothing in the TPD Article 20 amendments is in any way intended to, or indeed capable of, improving product safety for vapers or anyone else. The regulations simply add a massive complexity which will mean that only very large corporations will be able to afford to submit products for approval. This will damage the potential for innovation, destroy thousands of businesses across the EU and the migration of trade out of the EU. And at the same time it will hand the vaping industry to Tobacco and Pharmaceutical companies as they are among the few who could afford to entertain the costs of approval and registration.

Which is ironic, as they stand to lose the most from vaping replacing smoking. It is also appalling as the products they release are ineffective, out of date and unfit for purpose. The MHRA recently approved an "electronic cigarette" for medicinal use from British and American Tobacco, a product which originally saw the light of day in 2010.

That is exactly the product type I struggled with for 2 years trying to quit tobacco and failed. That is exactly why BAT pushed ahead with that type, failure.

It is also extremely sad as it will destroy the potential for Tobacco smoking to be replaced, destroy Harm Reduction. The product is insufficient to prevent relapse due to the battery size and refill capacity. The flavours are limited and will not improve, as large companies cannot provide the variety of devices and flavours needed to appeal to smokers, denormalise tobacco and keep people interested long term.


One laughable rule from Article 20 is the 10ml maximum refill size, forcing us to use far more packaging and energy, more carbon fuels in transportation. For what, safety? No, if someone were to drink a 30ml bottle they'll just as easily drink 3 x 10 ml. Although they wouldn't as it would taste utterly vile, I know as I've tried several! And the labelling on a 10ml bottle is so small as to be useless from a safety perspective.

So, what we are being told by Molly and the Green party is that they wish to listen to debunked reports, to ignore new developments in research and science and to ignore the opportunity to go back to the EU and put our collective hands in the air to say "STOP". That they are unwilling to act in good faith.

Why stop? Because this legislation is based on bad science, bad advice, bad judgement and ill will. It is founded in corruption and greed (see the allegations of BAT bribing the WHO FCTC in the last few weeks and indeed the EU ombudsmans findings on illegal meetings between the EU and Tobacco companies). The process itself was unconstitutional and has breached several EU laws (see the Totally Wicked legal challenge).

As I wrote in my previous email, I'd like the opportunity to speak to Molly (and indeed the others included in this missive) and ensure that she understands the reality and the consequences of this legislation.

I hope that this time next year does not see millions of EU citizens returning to smoking because Representatives are too weak to challenge this.

All comments are the responsibility of the poster and may be subject to moderation before release. 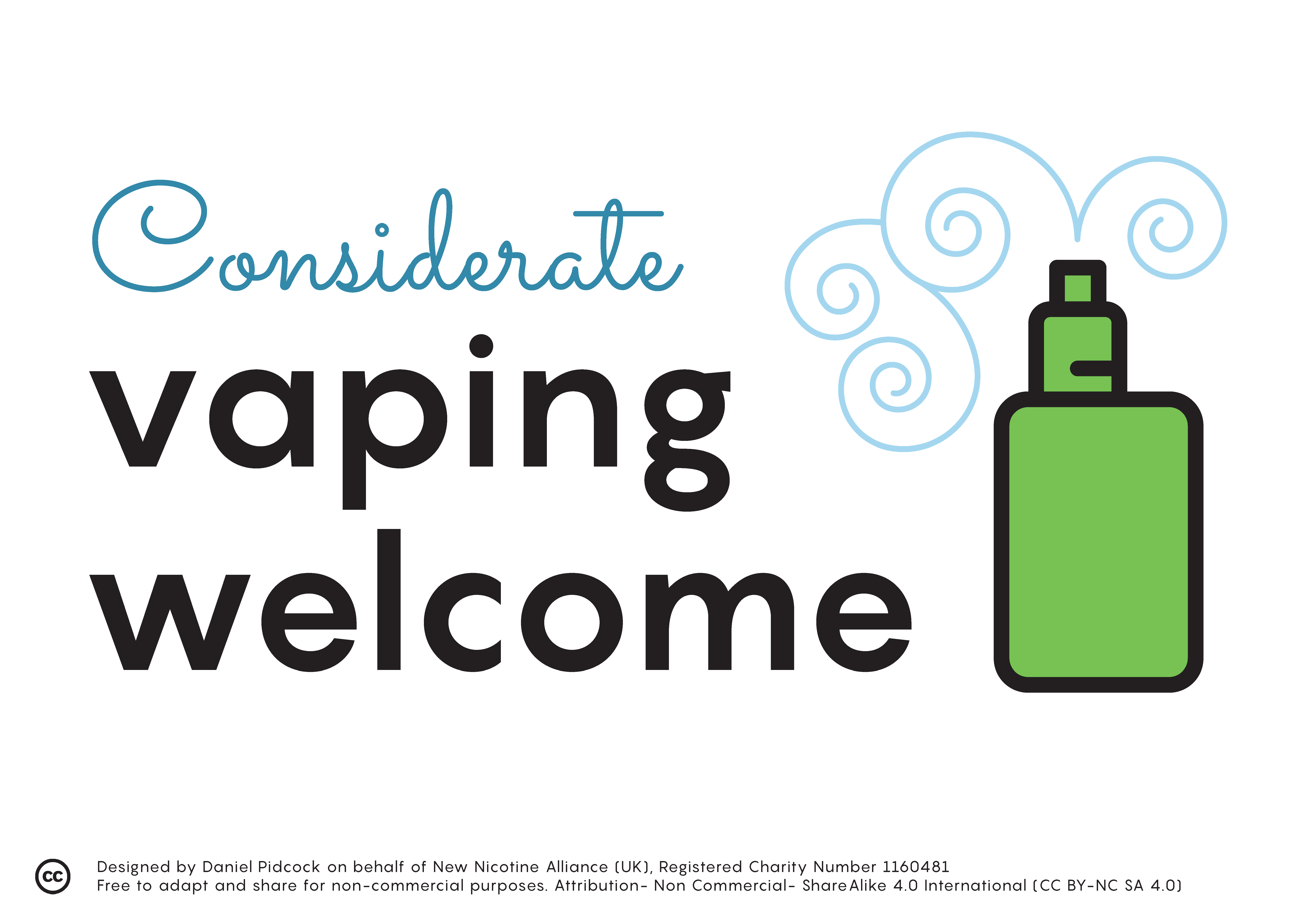 I'm an IT/science/technology geek and I smoked around 30 a day for about 17 years. 9 years ago I started vaping to try and reduce the amount I smoked. 7 years ago with the advent of the newer tank devices I switched completely. I still vape now and, when I have the time between my family and my work, act as an independent vaping advocate.
I am a Trustee of the New Nicotine Alliance (NNA) but I don't work in the vape industry. I volunteer with Stop Smoking Services to help ensure people get accurate, unbiased information.
I offer advice, reviews, opinions and frequently chase sketchy dealers.
Have fun!